Getting to know the background of this restaurant is like taking a tour of Europe. The name was inspired by a chef from Switzerland; the decor is a tribute to the artist from France; and the specialty is undeniably the traditional food of Italy.

Cafe Matisse on Bank Lane in Nassau, The Bahamas
Table for two at Cafe Matisse's courtyard

Cafe Matisse owner Greg Curry and his wife Gabriella ("She's the Italian," he pointed out) were vacationing in San Moritz when they met a talented chef named Matisse. He was so memorable that they named their cafe after him.

Inside the restaurant, Henri Matisse's art pervades. The brand tagline, "From canvas to table," playfully alludes to the French artist. Although it sounds very French, Cafe Matisse specializes in authentic Italian cuisine.

"We also make our own pasta, pizza, and bread," explained chef David Fiora, speaking with a distinctive Italian accent. Originally from Milan, Chef David has been working his magic in Cafe Matisse's kitchen for 15 years.

Since opening in 1996, Cafe Matisse has built and upheld a reputation for being one of the best fine dining restaurants in Nassau, The Bahamas. (Number one on TripAdvisor.) It sits in the heart of downtown Nassau, along a narrow alley called Bank Lane. The restaurant can be found behind the historic Parliament Square, a landmark that is hard to miss with its bright pink facade fronted with the statue of Queen Victoria. History reveals that the centuries old building, which is now Cafe Matisse, was once a horse and buggy firehouse. 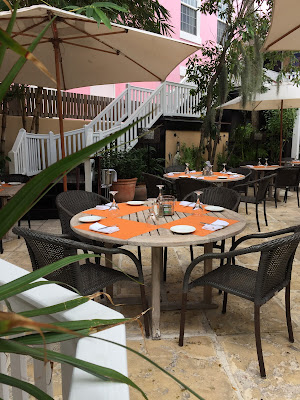 From the minute I stepped inside the restaurant, I instantly felt like a guest in someone's charming home. It was my friend Jane Lightbourne who suggested Cafe Matisse for a dinner get-together. After hearing rave reviews, I looked forward to dining there. I didn't expect I'd be smitten.

I remember that everything we ordered that night was great. Thanks to Jane, who offered me a bite of her appetizer, I was forever hooked to the heavenly octopus salad. I only had a morsel but it left a powerful impression with me. It was succulent and tasted as tender as a fine lobster dish. I've never had octopus that excellent before.

Also notable was the service we received. I could tell how well established the restaurant was just by observing the friendly and efficient staff. They moved purposefully and seamlessly like clockwork.

We were there early but it didn't take long for the place to fill up. If you have any idea about parking in downtown Nassau, you'll appreciate the popularity of this dining hotspot even more.

I was focused on spending time with our friends that I didn't take pictures that evening. So there I was back in Cafe Matisse the other day, on a mission to complete this story. I arrived before they opened for lunch service. Even though the staff was busy setting up, they remained helpful and courteous.

More of the garden courtyard

Shortly after, a modest Greg Curry casually walked in, briefly excusing himself to extinguish his cigar. The Bahamas-born restaurateur was kind enough to spare a few minutes answering my questions about his restaurant.

During this return visit, I was treated to Insalatta di Polipo, the Octopus Salad. Since the menu is updated every six months, the sublime appetizer came with a new twist this time around. The hero ingredient featured Spanish octopus which is packed with flavor. I enjoyed the contrasting textures of the octopus and the soft potatoes. The olives with the simple dressing gave the dish a delightful zest. And the ginger lemonade recommended by Tico was just the right beverage complement. It was refreshing, as promised by the gentlemanly food attendant.

The ginger lemonade makes the perfect beverage complement to the octopus salad.

I didn't want to leave without taking a photo of Greg. I found him sitting at the bar. "Make sure to get 'Lou Rawls' in the picture too," he joked, referencing a TripAdvisor review that stated their bartender sounded like Lou Rawls. I think his voice sounded more like Barry White. Ah, but the guy's charm is all his own.

Cafe Matisse is closed on Sundays and Mondays but open for lunch from noon to 3:00 p.m. and dinner from 6:00 p.m. - 11:00 p.m. the rest of the week. To view their menu, click here. Reservations are highly recommended.